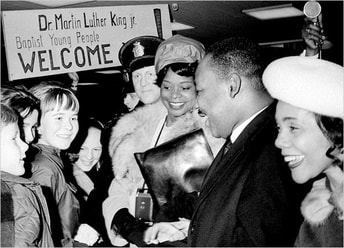 
The ideal of a Beloved Community is a place where every voice is heard, where not one single person feels unheard or voiceless.  We want to celebrate today all of the untold stories and unheard voices, but unfortunately there will never be enough time to hear them all.
You have probably heard it said that behind every great man is a great woman, and in the case of a very great man such as Dr. Martin Luther King Jr, there are many, many great women.
We have a troubling habit in this culture of imagining that the great movers and shakers of history have acted alone.  In the case of a Gandhi or a Jesus or a Rev. Dr. King, we imagine that these were unusually holy, unusually gifted men, and while they undoubtedly were, each one of them would be quick to clarify that they did not accomplish great things alone! It is a grave mistake to imagine that what we as individuals do is trivial.  As a group, we can move mountains.  As a Beloved Community, we can shape the world toward equality.
In the spirit of Dr. King’s Legacy of inclusiveness, I’d like to shine a light on some of the women who helped to create his enduring legacy. I'd like to introduce you to…
Dora McDonald, an African American woman who was an unsung heroine of Dr. King’s inner circle. She served as Dr, King’s personal secretary from 1960-1968. Dora McDonald worked with Dr. King at the height of his public service, his reception of the Nobel Peace Prize, the March on Washington, the Poor People’s Campaign, and countless other historic events. Dr. King thanked her in the preface of his book The Strength to Love. McDonald's dedication to the King family transcended work responsibilities as it was Dora’s solemn responsibility to inform Mrs. King of her husband assassination. After Dr. King’s death Dora McDonald would assist Mrs. King in creating the King center as well as publish her own memoir titled "Secretary to a King."

Next, I’d like you to meet Doctor Dorothy Cotton, who served as the director of education for the Southern Christian Leadership Conference — Dr. King’s civil rights organization — and was one of the highest-ranking women in that group. She managed the training of over 8,000 people in nonviolent protest, voter rights, and even basic reading and writing for those who lacked the necessary skills to get onto the voter roll.
Dorothy Cotton's triumphant motto was "If you back’s not bent, then nobody ride you." Dr. Cotton was a strong leader in the midst of scores of southern men, many preachers who were deeply invested in the patriarchy.  Dr. Cotton was one of the women in the movement who courageously spoke to the existing sexism in the movement. After the death of Dr. King, Dr. Cotton continued her work at Cornell University where the Dorothy Cotton Institute to promote a global community for civil right leadership was created in her honor.  Dr. Cotton’s memoir "If Your Back’s Not Bent" chronicles her journey and accomplishments in the civil rights movement.

I’d like to introduce you to Joanne Robinson who in 1949 transformed a personal moment of devastation into a moment of ascension for the civil rights movement. Robinson, a professor of English at Alabama State College in Montgomery, Alabama was an outspoken critic of the treatment of African-Americans on public transportation. In 1949 Robinson was forcibly removed from a bus and suffered a demeaning tirade of racist slurs by the driver and others on the bus. Not one to be intimidated, Robinson, along with other women, created the Women’s Political Council. The function of the council was to identify and address issues of concern for the local African-American community.
The success of the Montgomery Bus Boycott was possible because the Women’s Political Council had been doing steady and consistent work on the ground for the five years. The day the boycott launched was almost seamless because Robinson and others had organized drivers, built bridges with employers and created a network of information that ultimately sustained the boycott.
Upon reflection Robinson later spoke about the boycott in this way, “An oppressed but brave people whose pride and dignity rose to the occasion conquered fear and faced whatever perils had to be confronted. The boycott was the most beautiful memory that most of us will carry to our final resting place.”
These three are but the tip of the brilliant, powerful, womanist iceberg that undergirded the celebrity of Dr. King and allowed him to function in the magnificent way that he did.  Womanist.  Let’s pause for a moment.  I have more friends to introduce you to, but first - what does “Womanist” mean?
In 1983, writer Alice Walker coined the term “Womanist,” writing that “Womanist is to feminist as purple is to lavender.” Walker was responding to issues that she and other African American women of her time saw in second-wave feminism.  Among these issues were a lack of inclusiveness, a whitewashing, and a problematic individualism within the second-wave Feminist movement.
Womanism is more than just black feminism; it is the powerful, BIPOC-inclusive wave of feminism that gave birth to the Black Lives Matter movement.  Womanism is all-inclusive in its insistence on extending compassion to all and not resting until everyone’s voice is heard.
I would be remiss not to mention such powerhouses as Ella Baker: Often called the Mother of the Civil Rights movement, Baker was handpicked by Dr. King to be the executive director of the Southern Christian Leadership Conference. Those close to her affectionately called her “Fundi,” a Swahili word which means a person who teaches a craft to the next generation.
Coretta Scott King, the good Reverend’s wife was more than just a wife, but a powerhouse in her own right.  She spent her life fighting not just for Black civil rights, but women’s rights, LGBTQ+ issues, world peace, economic equality, and other social justice issues.
And lastly, please meet the singer Mahalia Jackson, a close friend of Dr. King's, who he turned to in his moments of despair. The story goes, that Mahalia Jackson inspired the good doctor in the middle of his most famous speech.
When Dr. King was at that famous March on Washington, standing in front of the massive crowd and the microphones, and seemed to be losing steam.  Mahalia yelled helpfully above the din of the crowd to remind him of a conversation that they had had previously.  “Tell Them About the Dream, Martin!”  And history was made.
This is a very clear example of how the great Dr. King was great because he had great people supporting him.  He was great in part because he was open to hearing input from others, from women!  He was not great alone, but was great due to the powerful Beloved Community with which he surrounded himself.
And there are so, so many more.  The unremembered supporters of the Buddha, of Lao Tzu, the women behind the scenes who supported Jesus (come to our Friday night Historical Jesus class to learn more about them!)
No one person is great alone.  But gratefully we can be thankful that not one of us is alone.  This Beloved Community is powerful in heart and in spirit.  Let’s continue having conversations about equality, liberation, and the 8th principle. We, this Beloved Community, are a people of change and of action.